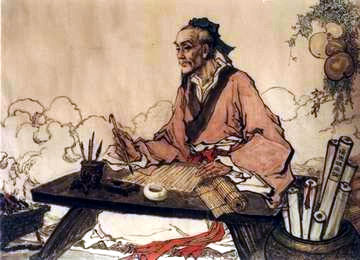 [Usage] For the three ingredients above, use three shēng of water, and boil until one shēng remains. Remove the dregs, divide into two doses, and take warm twice daily.

[Interpretation of Formula Presentation] This formula’s function is to break yīn, return yáng, and diffuse and free the upper and lower burners. It is essentially sì nì tāng (Frigid Extremities Decoction) with the moderating gān cǎo (Glycyrrhizae Radix) removed, and the yīn breaking, yáng freeing cōng bái (Allii fistulosi Bulbus) added. This formulas presentation is one of yīn exuberance and yáng deficiency. The repelling of yáng is the main pathomechanism involved in this presentation. It is quite easy to recount the usage of this formula from the Shāng hán lùn (傷寒論 Discussion of Cold Damage), as it is simply a Shào Yīn pattern with diarrhea, and a faint pulse. In addition to these signs, in clinical practice we may also see; reversal-flow in the extremities, fear of cold, a cold back, throat pain, a pale throat, diarrhea with undigested food particles, a slippery-white tongue coating, and a faint, deep, and hidden pulse.

(1) A Pattern of Reverse-Flow Upcast Yáng in Pregnancy

The following is a case of a thirty-six year old female patient treated in hospital after losing consciousness. After getting out of bed that morning, she had felt completely normal, but had suddenly experienced dizziness and flowery vision. After falling over in her kitchen, she went to bed to quietly lie down, and it was at this point that she had lost consciousness.

Consultation: The following signs and symptoms were noted; a hidden, imperceptible pulse, reversal cold in the extremities, white facial complexion, with slightly red cheekbones, and occasional nausea with a desire to vomit.

The dizziness and reversal were due to the dual deficiency of liver and kidney yáng. The exuberance of yīn qì in the lower burner caused deficient yáng to float upwards, bringing forth the signs of upcast yáng. At this point she had just entered her ninth month of pregnancy. In this particular case, a modified version of Bái Tóng Tāng (Scallion [Yáng] Freeing Decoction) was indicated.

After taking the above decoction, sounds of water seeping through her chest and abdomen were noted, and afterwards copious amounts of water were discharged trough a bowel movement. When returning to visit her later in the afternoon, she was already feeling normal and had completely recovered. She was still experiencing diarrhea, so a modified version of lǐ zhōng tāng (Regulate the Middle Decoction) was administered.

A twelve-year old male student was brought to the clinic for a consultation. Every morning after getting up, he experienced continuous headaches, which were accompanied by spontaneous sweating, exhaustion, a fear of cold with a desire to be warm, a pale tongue body with a white coat, and a deep-thin and strengthless pulse. If no treatments were administered the headaches would usually subside by the afternoon. Previous Chinese medicine doctors treated his headaches as qì deficiency type headaches, which offered no relief, and was now seriously starting to affect his studies.